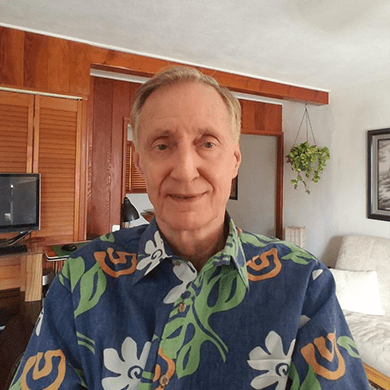 A Somatic Educator, Therapist, and Coach (B.A. M.A. LMT) working with movement-based neurological learning, and functional breathing. Steve began his practice in Somatic Therapy and Namikoshi Shiatsu in 1986. A Hawaii resident since 1976, he is located in downtown Honolulu.

A 2006 bike accident allowed Steve to apply his work to his own recovery. A former NCAA athlete, he found walking with pain and a pronounced limp unacceptable. The use of somatic awareness, and functional breath-work not only restored normal walking, but ushered him back into athletics after a long absence, capturing several USA National Outdoor track titles at 5000 & 10,000 meters, and even top podium marathon finishes at Boston & Honolulu to cap an enlightening journey back to one’s self. He offers…”I’m often the lab-rat for reco’s & suggestions to my clients…this was no different. The achievements and accolades felt great, but it’s even nicer to see those you’ve worked with overcome adversities and thrive…especially when they later cross a room or parking lot just to say ‘thanks’! ”

Steve works with individuals (or small groups) of all ages and backgrounds using somatic movement awareness and tailored progressive breath-work. “…Those years following the accident reshaped my entire practice. The physical benefits are obvious, but the neuroscience aspects are still being discovered…the path to movement awareness and functional breathing doesn’t end there!”