Science / Functional Breathing Technique / What is a Breathing Pattern Disorder

Muscle Pain? RSI? Fatigue? You May Have a Breathing Pattern Disorder

Why Abnormal Breathing Patterns Affect Movement, Stamina and Performance. And What You Can Do to Improve Dysfunctional Breathing.

Did you know, the way you breathe every day impacts the way you feel? Poor breathing mechanics affect movement. Injury risk increases and you get tired faster. Oxygen delivery drops and, long-term, your health suffers. Even if your breathing feels okay, your sporting performance can plateau when breathing is sub-optimal. But since you breathe, all day, every day, it can be hard to recognize you could do it better. Even when there’s an obvious issue like exercise-induced asthma. And too often, the advice to “take a deep breath,” given by everyone from sports coaches to yoga teachers, can exacerbate dysfunctional breathing. What is a Breathing Pattern Disorder?

“A breathing pattern disorder, or dysfunctional breathing, is a condition in which breathing is problematic and produces symptoms such as breathlessness. It manifests as a psychologically- or physiologically-based habit, such as breathing too deeply, breathing too fast (both symptoms of hyperventilation), upper chest breathing during rest, or breathing irregularly with frequent breath-holding or sighing. Breathing pattern disorders affect 9.5% of the studied adult population, rising to 29% among people with asthma and 75% of those with anxiety. These figures are not surprising, given that asthma, anxiety, panic attacks, and stress, all negatively influence breathing patterns, feeding back to create a vicious cycle of inefficient breathing.” — Excerpt from The Breathing Cure, by Patrick McKeown

Signs you may have a breathing pattern disorder:

All these symptoms can point to chronic hyperventilation — habitually breathing more air than your body needs. Hyperventilation is often fast breathing. It’s normally shallow, chest breathing. It’s often through an open mouth. Long-term, it’s very bad for you, contributing to heart disease, high blood pressure and early mortality. You can see why the instruction to, “take a deep breath,” which often results in a fast, hard gasp of air, may be detrimental.

If you constantly feel unwell, this might already be making some sense to you. A sedentary lifestyle can impact the way your body processes oxygen, and if breathing is hard work, it’s likely you don’t really enjoy exercise. But if you’re fit and healthy, surely your breathing is functional, right?

Not necessarily. Here at Oxygen Advantage® we regularly work with elite athletes to optimize performance through breathing. And we always begin by addressing abnormal breathing patterns first.

Which leads us to ask the question…

Can athletes have breathing pattern disorders?

The answer is yes. It’s incredibly common for athletes to have dysfunctional breathing. It’s possible to be incredibly physically fit without being really “well,” and we often work with athletes whose breathing is sub-optimal when they begin the breath training.

The reality is, asthma and respiratory infections are more common among athletes. Elite athletes frequently experience high levels of stress. Pro rugby players, boxers and weightlifters are quite likely to have sleep apnea. Training and travel schedules can lead to sleep deprivation, just when you need top quality sleep to perform. And most of us don’t really understand the science behind how to breathe to alter — and optimize — physical and mental states.

What is the correct breathing pattern?

We know that dysfunctional breathing often involves fast, shallow, upper chest breathing. Mouth breathing is a key factor in any breathing pattern disorder. Just like any movement pattern, these types of breathing become habits. To address these, we need to replace these habits with new, healthy ones. And to do this, the first stage is always awareness. 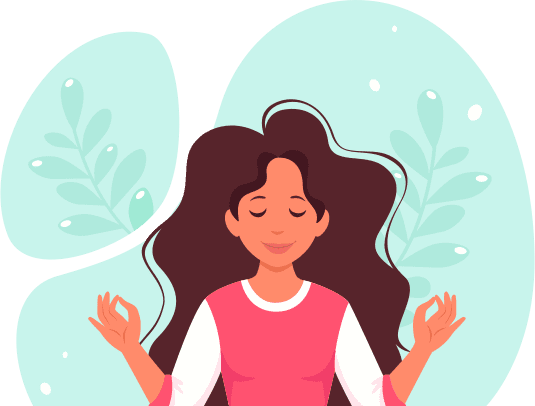 Healthy breathing is through the nose

When it comes to breathing, the nose is an incredible organ. It filters and warms air as you inhale. It helps keep you hydrated as you exhale. It keeps you safe, sterilizing inhaled air, to eliminate bacteria, viruses, and allergens before they reach your lungs.

The mouth has no function in the respiratory system, except that it forms a back-up route for air if the nose is blocked, or when exercise is so intensive that you need to breathe a much larger volume of air.

Nose breathing adds greater resistance to breathing. It slows the breath, relieving stress. It engages your diaphragm too. When the diaphragm works properly, lung volume increases.

By switching to nose breathing, day and night, you’re less likely to experience insomnia or wake yourself up snoring. While snoring can be something we joke about, sleep-disordered breathing is not funny. Left untreated, sleep apnea can be deadly.

Changing the habit of mouth breathing

When you exercise, your body needs more oxygen for energy. As the muscles warm up, they begin to produce carbon dioxide. Carbon dioxide (CO2) is important, because it is the catalyst that causes red blood cells to release oxygen to your cells and organs, where it is used to make energy. Because of this, CO2 provides the body’s primary stimulus to breathe in.

When breathing is fast and hard, you can blow off too much CO2. When CO2 is low, oxygenation will never be optimal, even if your blood is fully saturated with oxygen.

It’s therefore important to develop greater tolerance to changes in CO2. If you can tolerate the feeling of air hunger caused by rising CO2, your breathing will become more efficient.

We reduce sensitivity to CO2 by practicing the Breathe Light exercise. This provides optimal oxygen delivery while reducing your breathing volume, acclimatizing you to feelings of air hunger. When you understand that breathlessness indicates changes in blood carbon dioxide levels, not a lack of oxygen, it becomes easier to work with the discomfort. In time, your body adapts, reducing your sensitivity to CO2. Stamina improves and breathlessness decreases. Slow breathing enhances breathing efficiency. It improves arterial oxygenation, because less air remains in dead space, and more air gets to the small air sacs (alveoli) in the lungs, where oxygen and carbon dioxide are exchanged.

When you use the Breathe Slow exercise to train yourself to breathe at an ideal rate of 4.5 to 6.5 breaths per minute, you will experience less breathlessness and stress. You’ll sleep better. And breathing will be more efficient, leading to performance gains [1].

Breathing Light and Slow also allows nitric oxide to accumulate in the nasal cavity and travel to the lungs. Nitric oxide helps sterilize the air. And it opens the airways and blood vessels in the lungs, improving oxygen uptake to the blood. 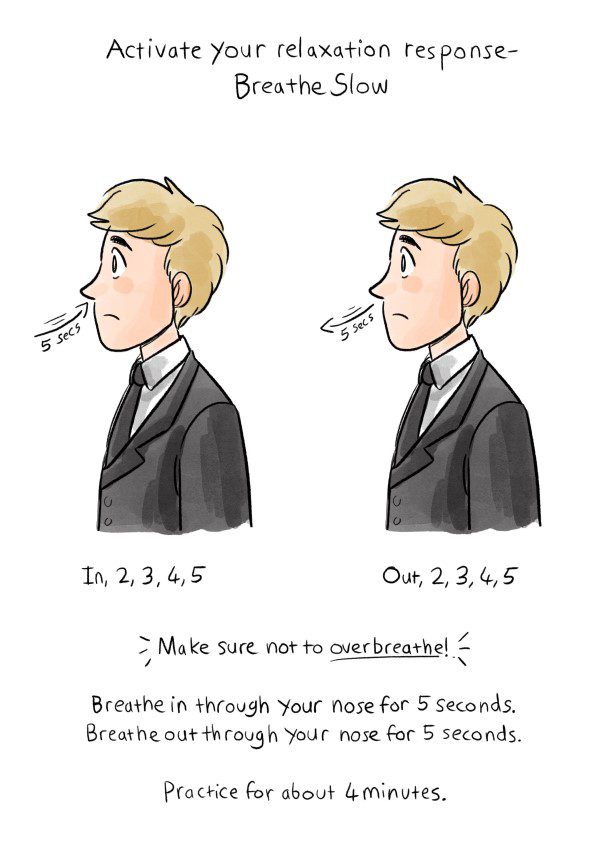 Breathing patterns play an important role in mechanical stability and mobility of the spine and trunk. When you breathe from your diaphragm, every breath creates pressure within the abdomen. This pressure, which is called intra-abdominal pressure or IAP, supports your spine and pelvis. We often think of the core as just the abs, but the diaphragm is integral to core strength too.

According to an article in the International Journal of Sports Physical Therapy, dysfunctional breathing, such as chronic hyperventilation, can cause musculoskeletal pain. Musculoskeletal injury is quite common amongst athletes.

One study reports that around 14 collegiate athletes are injured during competitive season for every 1000 competing [3].

Moreover, upper chest breathing requires effort from smaller breathing muscles. These “accessory” muscles are useful for lifting the ribs up and out, but are not designed to be active all the time. Just as muscular imbalance in the joints can lead to repetitive strain injury, this overuse contributes to the development of trigger points, back and neck pain and strain.

The bottom line is this: If breathing is not functional, movement cannot be. How do I check my breathing pattern? What the scientists say Until recently, there was no single screen to identify dysfunctional breathing patterns that acknowledged all three of these dimensions. In 2017, Dr. Kyle Kiesel, Professor and Program Director of Physical Therapy at the University of Evansville, set about addressing this problem. He decided to create a breathing screening tool that could be used by coaches, instructors, and healthcare professionals, to help identify dysfunctional breathing patterns. Here’s a quick run-down of his study:

From the study results, Kiesel concluded that a breath-hold time (BOLT score) of 25 seconds, along with answers to four simple questions, can be used to accurately screen for dysfunctional breathing patterns.

The four questions in the dysfunctional breathing screen are: If you answer “no” to these questions, and if your breath hold time after exhalation is greater than 25 seconds there is an 89% chance that dysfunctional breathing is not present [4].

A breath-hold time or BOLT score of less than 20 seconds indicates that breathing is dysfunctional, or lung function is poor. But there are other physical breathing pattern disorder symptoms to look out for too.

Dysfunctional breathing patterns, including hyperventilation syndrome and fast breathing, can produce respiratory alkalosis. This is a condition in which breathing causes the blood to become too alkaline. It can trigger changes in physiological, psychological, and neuronal states within the body. These can negatively affect health, performance, and the musculoskeletal system.

Because of this, alkalosis results in an array of symptoms, including headache, dizziness, chest pain, trouble sleeping, breathlessness, light sensitivities, exhaustion, muscle pain, and cramps. Athletes with abnormal breathing can experience muscle fatigue and excessive breathlessness during physical exercise [5].

How common is dysfunctional breathing?

In one study of 34 healthy men and women, over 70% had irregular breathing patterns. As well as the obvious breathing symptoms and the detrimental changes in blood pH, studies have linked dysfunctional breathing and hyperventilation with many health conditions. These include epilepsy, diabetes, osteoporosis, chronic fatigue, back, jaw and neck pain, and PMS.

When you have a breathing pattern disorder, pain can be accentuated, due to the relationship between the diaphragm and pain perception. You can read more about the connection between abnormal breathing patterns and health in Patrick’s 2021 book, The Breathing Cure.

In the study mentioned above, resting end tidal carbon dioxide was significantly lower in chest breathers than in diaphragm breathers. Those with an irregular breathing pattern scored worse on the Functional Movement Screen (FMS) compared to those with normal breathing patterns. The FMS is used to predict risk of injury in athletes. The study results highlight the relationship between dysfunctional breathing patterns and dysfunctional movement patterns. It’s worth noting that 87.5% of study participants who passed the FMS exhibited abdominal or diaphragmatic breathing. They moved correctly because they breathed correctly [6].

Is a breathing pattern disorder curable?

Breathing pattern disorder treatment involves re-education of breathing habits. It is easily possible to retrain irregular breathing patterns by consistently practicing a handful of simple breathing exercises. As you work with the exercises, your biochemistry, biomechanics, and physical and mental states will adapt. You will start to breathe better and feel better.

What’s more, because breathing is such an important motor function, and so connected with your nervous system, correction of dysfunctional breathing can even result in new neural connections in the central nervous system. This can restore normal motor control patterns [5]. In other words, sort your breathing out, and your body will naturally revert to healthy movement patterns.

Restoring functional breathing — 5 tips to get you started