HOW TO BOOST FOOTBALL FITNESS 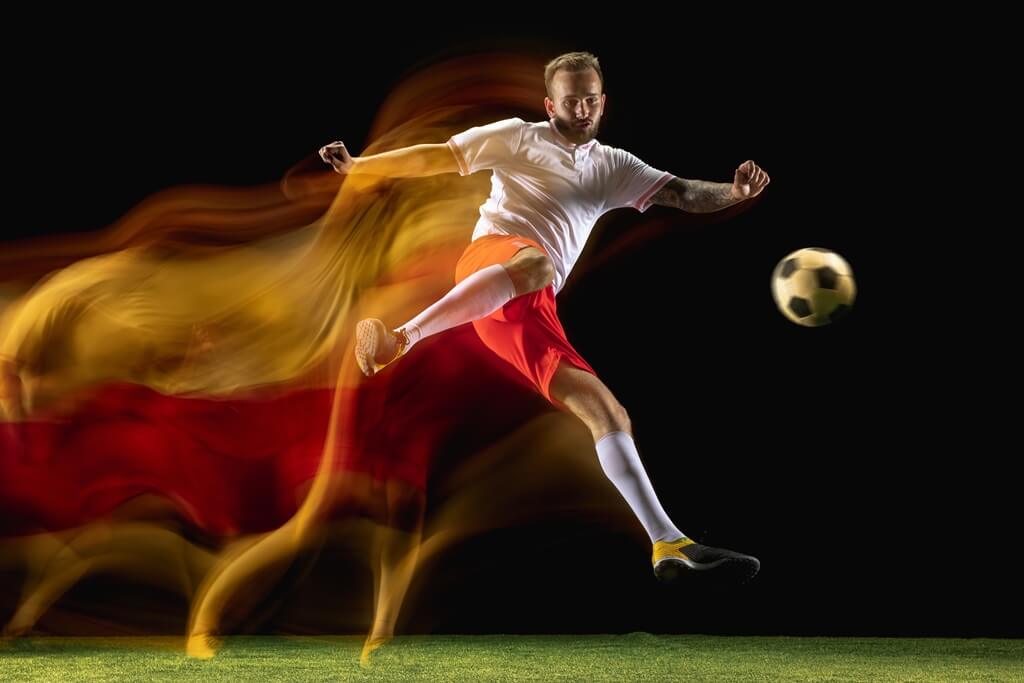 Have you ever tried to nose breathe during a sprint? It’s not for the faint hearted.

Nose breathing improves performance on the football field. And it pushes your mental and physical boundaries. Especially when you’re running flat out.

Or take it up a level…

Exhale and hold your breath. Jog or sprint with empty lungs. Keep going until you feel strong air hunger. This exercise boosts repeated sprint ability in professional team sports players. And it works in just a few weeks.

Why? Because nose breathing adds a load. And effective training is all about adding an extra load.

OA™ is a breathing technique to improve sports performance. It uses 2 main pillars:

This is a powerful exercise that delays lactic acid and fatigue. It also results in improved oxygen-carrying capacity.

Why do I need this? To be successful and maintain performance, you need to be faster and stronger.

You need weekly strength and power training even out of season. And off the pitch, you work hard to optimize physical condition.

You need physical agility. But you also need mental focus, resilience and recovery. Skills like maximal speed and repeated sprint ability are fundamental.

From healthy diet and nutrition to interval training and core strength, you eat, sleep and breathe football.

But do you think about how you breathe?

OA™ pushes you harder to maximize fitness and conditioning. And it teaches you to access your nervous system so you can maintain a calm, focused mind.

How does Oxygen Advantage® work?

In the OA™ method we talk about breathing from three dimensions:

The foundation of all three dimensions is nasal breathing.

Despite what many fitness experts tell you, nose breathing in and out is better. During intensive play you’ll need to open your mouth to breathe. But when you’re training, nose breathing:

Not a bad result, just from keeping your mouth shut. Your football warm-up is an ideal time to add some breathing exercises. You can do this in 2 easy ways without interrupting your training:

1. Breathe slow and low, only through your nose
During low intensity work, nose breathing is key.

Open mouth breathing makes it difficult to engage your diaphragm. And it blows off too much carbon dioxide (CO2).

CO2 is important. Your body needs it to access the oxygen in red blood cells. When you breathe hard through an open mouth, you deprive your body of oxygen.

Mouth breathing is also linked with:

And, when it comes to airway health, open mouth breathing bypasses your body’s immune defenders. It leaves the goal wide open for viruses and allergens.

At a time when we’re particularly aware of infection spread, this is really important.

Recommendations:
Use MYOTAPE Sport while your body adapt to nasal breathing. If you have a small nose, deviated septum or nasal obstruction, use an internal nasal dilator to optimize airflow.

Strong breath holds simulate training at high altitude. They challenge the body, open the airways and improve diaphragm strength. They also boost your body’s response to your workout.

Practice this exercise as part of your weekly training to increase EPO.

Strength training and speed in football

Anaerobic capacity is an important factor in football. In any single game, you need to switch quickly between jumping, running and repeated sprints. You can reach speeds of 30 km/h for as much as 5% of the match. And you might change direction as many as 500 times.

Positive effects of anaerobic exercise include:

During training you’ll practicespeed drills like repeated shuttle sprints. These exercises are intense. But they can increase risk of ankle, ACL and hamstring injuries. This can leave you sitting on the bench during important games.

Instead, add strong breath holding to your football fitness drills. You will get a better anaerobic workout, without the risk of injury.

How to get fit for football

Research shows that stamina on the pitch is directly related to breathing efficiency. When your breathing is slower, circulation and oxygenation are better. Which means you have more energy when you need it.

Breathing becomes more efficient when you decrease your sensitivity to CO2. When tolerance to CO2 is low, you will experience more breathlessness. And your breathing muscles will have to work harder.

The OA™ uses a measure called the BOLT score. The BOLT is an objective measure of sensitivity to CO2 and to breathlessness.

To measure your BOLT score, you will need a stopwatch or timer that counts in seconds.

Many pro athletes start out with a BOLT score of about 20 seconds. If you have asthma it might be lower. With regular practice of the breathing exercises, you’re aiming to reach 40 seconds.

When your BOLT score is 40 seconds, breathing is light and slow during rest and moderate exercise, and the nervous system is well balanced. When you think about muscular endurance in football, you might not consider your breathing muscles. But any fitness program for football players should include exercises to strengthen the diaphragm.

Your diaphragm forms an integral part of your core. As it moves up and down, it creates pressure in your abdomen that stabilizes your spine and pelvis.

A strong diaphragm muscle is essential for agility. If breathing is not functional, movement cannot be. If your diaphragm is exhausted, you’re more likely to get injured.

The diaphragm is made from the same type of muscle as the muscles that move your joints. You can thicken it to support functional movement, power and endurance. But it can be difficult to strengthen the diaphragm during normal football fitness training, because it’s normally only possible to exercise to the limit of the breathing muscles.

But lactic acid is not the only cause of heavy legs. Your body will always prioritize breathing. So, when your breathing muscles tire, your body diverts blood from your legs. The only way to avoid this is to develop more efficient breathing.

When your breathing muscles are stronger and don’t have to work so hard, circulation to the working muscles in your legs can increase by as much as 7%. It’s normal to have sore muscles after your workout. Delayed onset muscle soreness (DOMS) is a sign your muscles are building. But you can use breathing exercises to help the process of recovery — post-sprint, post-match and during half time.

The OA™ can help muscular recovery in 3 ways:

1. Efficient breathing for better body oxygenation
When you breathe through your nose, your muscles get more oxygen. This helps them function better and recover fast.

We pay attention to how you breathe post-sprint to get optimal oxygenation.

3. Paced breathing means quick muscle recovery after your workout
Slow, paced breathing at 4.5 to 6.5 breaths per minute improves the function of your body’s rest and digest systems.

This builds better heart rate variability and vagal tone. And it improves overall health. HRV is important for mental and physical resilience. Low HRV can indicate overtraining and leave you vulnerable to injury.

When you slow your breathing down, you’ll also sleep more deeply. Deep-stage sleep is vital for your body’s recovery from exercise. Mental toughness in football is not about pretending to be strong. It’s about resilience, getting enough rest, recovery and confidence in your ability.

It’s about pre-game mental preparation. Focus, concentration, and knowing how to get in the zone.

You can deliberately access this psychological control using your breath. And once you’ve developed this skill, it transcends every area of your game. Because when your mind isn’t racing, you can concentrate and play at your best.

Oxygen Advantage® includes exercises to up-regulate and down-regulate your nervous system. Over time, you develop resilience to stress and learn to master the mental and physical systems you need to excel.

In a highly competitive sport, performance anxiety can carry a stigma. But like it or not, sports anxiety can manifest during important games or penalty shoot-outs. It can show up as insomnia when you need a good night’s sleep. And anxiety in football players can lead to problems with drug and alcohol misuse.

Performance anxiety in sport is closely related to breathing. When you’re stressed and nervous, you are more likely to hyperventilate (over breathe). This feeds back to make your anxiety worse.

Fast, hard mouth breathing activates your fight or flight response. If you watch top strikers prepare to score, you see them focus in on the ball. The mouth is closed, the breathing calm. For Gareth Southgate’s notorious Euro 96 penalty his mouth is open to breathe. Conversely, if you look at Alan Shearer, more often than not, his lips are clamped shut as the ball flies into the back of the net.

It’s no coincidence. Nose breathing supports calm mental focus and helps with spatial awareness. If you prepare your penalty kick with a big breath in through your open mouth, science says you’re less likely to score.

The OA™ uses paced breathing at 4.5 to 6.5 breaths per minute. This activates your parasympathetic nervous system which down-regulates stress. It gives you the tools to focus, even under intense pressure.

Sleep recovery and performance in sports

But when your life revolves around football, sleep won’t be your number one priority. Intensive schedules and high stress mean sport and sleep often don’t go hand in hand. Even though pro football players actually need more rest.

Face it, you need sleep for recovery and performance in sports. When sleep is inadequate, stress hormones rise, and physical and mental health suffers.

Science has also proven that significant number of young athletes have sleep-disordered breathing. In fact, they’re more at risk than the average middle-aged man. These young players are also more likely to have low blood oxygen levels and higher pulse rates at night. Which leaves them vulnerable to heart abnormalities.

The study I just described examined sudden cardiac death. This indicates just how important sleep is for young players.

Some facts about sleep and sports performance

What can professional soccer players do to improve sleep?

More and more team sports players are using breathing exercises or ‘breathwork’ to ensure optimum performance. The science already exists to show that it works. Don’t get left on the sidelines. Breathe new life into your football fitness training. Get the OA™.

Patrick Mckeown
Patrick McKeown is creator, CEO and Director of Education and Training at Oxygen Advantage®, Director of Education and Training at Buteyko Clinic International and President of Buteyko Professionals International. He is a leading international expert on breathing and sleep, and author of bestselling books including The Oxygen Advantage. His focus — to empower more people every day to breathe better, feel better and achieve their potential.
← THE WIM HOF BREATHING METHOD AND PATRICK McKEOWN’S OXYGEN ADVANTAGE IS IT SAFE TO EXERCISE WITH HIGH BLOOD PRESSURE? A QUESTION OF HYPERTENSION →